Cascades Academy is an engaged, vibrant community that weaves challenging academics with experiential learning to inspire socially responsible individuals ready for a diverse and changing world. 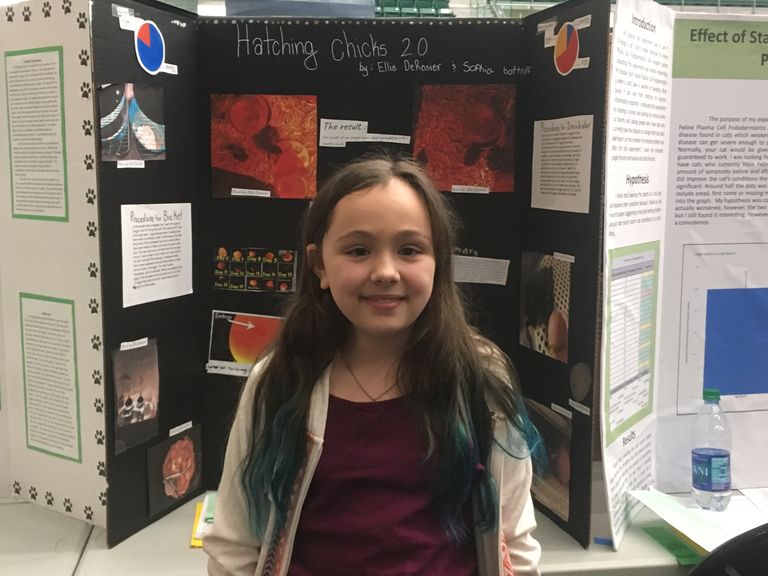 On April 12th, 17 of our Middle School students were in Portland, representing the school at the annual Northwest Science Expo. There were over 500 projects displayed by middle and high school students from Oregon and Northwest Washington. Senator Wyden made an appearance and spoke to the students to encourage them to keep up the great work on scientific research. He inspired them to make a difference in our world through their intellectual curiosity, hard work and dedication to scientific inquiry.

Our Cascades Academy representatives were chosen from our school science fair which took place from March 5th through 7th. Several judges, from inside and outside of our school community, ranked each project for its originality, thoroughness, presentation and adherence to the scientific method. The top ten projects were chosen to represent our school. Ivy and Nicolas could not attend the Expo due to various conflicts, so we were able to take the 11th and 12th placed projects as well.

Those who represented the school at the statewide science fair included eighth graders Ethan, Hunter, Eric and Kristof; seventh graders Chloe, Louisa, Lucy, Eban, Stella, Reed, Zander, Jenna Anne, Lilly, Ellen and Twyla; and sixth graders Sophia and Cannon. At the Expo, the students had to stand in front of their posters for 90 minutes while judges circulated around the venue, interviewing students. All of our students got high marks for their communication skills and scientific rigor, and several of the projects were recognized at the award ceremony.

Eric was awarded third place in the category of Medicine and Human Health. His project was an experiment to test the toxicity of vaping by measuring the growth of bacteria on petri dishes that were exposed to bacteria and the aerosol released by e-cigarettes. He found that the vaping liquid killed all of the bacteria on his growth plates, leaving one to wonder what cells it would kill in someone's lungs.

Chloe, Louisa and Lucy were also awarded a third place ribbon, in the category of Human Behavior and Sociology. For their experiment, they tested whether meditation or exercise immediately before a test would improve the test grades, and they concluded that meditation improved test scores better than exercise did.

Hunter and Ethan earned an Honorable Mention in Microbiology for their work on comparing the amount of bacteria on US, MS and LS door knobs at our school. The Upper School had the most bacteria on their doors! I guess the Lower School students really do listen to the teachers and wash their hands!!

Eban and Stella earned an Honorable Mention in Medicine and Human Health for their experiment testing the effects of soda and coffee on teeth. They found that both liquids discolored teeth, but the soda was far more detrimental. For the teeth soaking in soda, the overall mass of the teeth decreased over time. We hope that students and adults decrease their consumption of sugary sodas as a result of this project!

Kristof also was awarded an Honorable Mention for his work in Animal Science. Kristof interviewed cat owners whose cats have a disease called Feline Plasma Cell Pododermatitus. He was able to conclude that a reduction in starch in the cats' diets led to a reduction in some of the symptoms of the disease.

I am so proud of these students, as well as the students from the other five projects. Sophia represented her teammate Elle D. on a project hatching chicks in different types of incubators. Cannon represented his teammate Hayes on a chemistry experiment testing what antacids are best at changing pH. Jenna Anne, Lilly and Ellen presented a project on girls' and boys' sensitivity to spicy salsa, Twyla presented a project on factors that affect the rate of bread molding, and Reed and Zander presented their work on the environmental hazards of oil and gas and found them both to be highly toxic to snails.

The students had a great time on the trip. They were poised and professional during the judging, and had lots of laughs with each other during the long bus ride to and from Portland. It was a pleasure for Ms. Meadow and me to chaperone the crew, as they were respectful and happy to be there. We also had the opportunity to look at the high school posters and to be inspired by their work to do even better next year!

Admissions
Our Admissions Office is still open and accepting inquiries and applications. For more information and a Virtual Campus Tour, visit the Admissions page.

Camp CREATE Summer Program
The Governor has issued guidance for summer camps and we are thrilled to be able to offer camp beginning July 6! Space is still available in some camps and waitlist signup is available for others. For more information, please visit the Camp CREATE page.